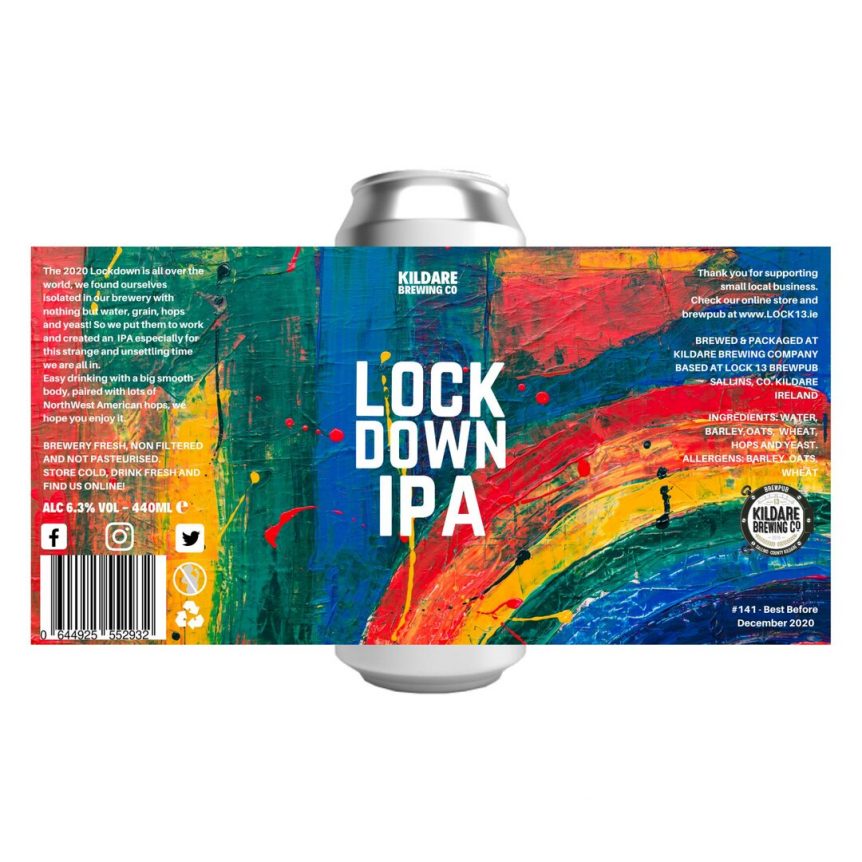 Starting this site left me in a bit of a bind. It’s our first post and there’s a raft of craft that I would like to talk to you about. I’ve been on my own journey of discovery over the past year or so. Finding my favourite crafties has been fun and now I’m ready to write about them. I had planned to discuss The White Hag’s Atlantean NEIPA, namely because that was the wee can that made me start this site. But I’m going to keep that for, maybe, post number two. Instead, I’m going to feature a beer born out of the bat shit crazy world we find ourselves in today. I want you to meet the Lockdown IPA from Kildare Brewing Company.

The Current State of Craft Brewing

The whole Covid-19 thing is beyond crazy, isn’t it? While I said there that I started this site because of a NEIPA from The White Hag, that wasn’t the sole reason. For nearly two years I’ve been experimenting with crafties on draft and from cans, trying to understand what my palette wanted. Then, because of Covid-19, this suddenly came under threat.

Again, without trying to just harp on about The White Hag, online has become a critical outlet for craft brewers. The White Hag launched their latest IPA amid fears their beer would “be poured down the drain if [they couldn’t] sell it online, such is the drop off in demand from the pub trade, and subsequently the brewing trade in Ireland.

So it occurred to me that I have the skills required to bring gorgeous Irish crafties to the people of Ireland, replacing shite beer everywhere as we go. At least, I have the skills in terms of I like craft beer and I can build websites. So here we are. The Hoppy Ending was born.

The Story Behind Lockdown IPA

Anyway, I digress. While the whole Covid-19 thing has been a seismic shock through the craft brewing industry, some are trying to harness what’s going on in an effort to make a purse from a pig’s ear. Kildare Brewing Company is one such brewery.

Upon finding themselves isolated in a brewery with nothing but water, grain, hops and years, the team in Sallins did what any self-respecting craft fans would. They got brewing.

Now, I’ve not tasted this brew at all. I’m reading of the can they have online and I’m taking their word for it because I couldn’t pass up featuring them as our first beer of the week. But the Kildare Brewing Company’s Lockdown IPA promises was crafted for the strange times that we now live in.

It ticks the first box of excitement for me as it’s a hazy IPA using classic Minch Malts with added oats, wheat & honey malt. The lot has been dry-hopped with Citra, Centennial, Cascade, El Dorado, Simcoe and Amarillo. On paper, it’s an absolute beaut offering a smooth mouthfeel and fills the palette on impact.

If you’re looking to match this up with some grub, it goes mighty with meaty pizzas, BBQ vegetables or white meat dishes.

Floral and fruity this beer is a one-off seasonal but beyond the stunning combination of ingredients in this IPA, there’s something more going on.

Craft for a Good Cause

The craft industry could have laid down and died but it didn’t. They could have stopped brewing, but they won’t. Not only are they surviving, but the Kildare Brewing Company is also sharing the profits from their new Lockdown IPA. They’ll be donating money to local hospitals to help them in their fight against Covid-19.

We’re hoping to have a more personalised experience of this brew in the next week or so, so be sure to follow us on Instagram for updates.

Pick yourself up a case of 12 x 440ml Lockdown IPA 6.3% cans on the Kildare Brewing website for €38 for collection if you’re nearby. They’re also hoping to get into some of Ireland’s top craft off-licenses, so watch this space. Finally, you can also grab the same case of Lockdown IPA from Beer Cloud. Note, these are going to be part of a very limited run so keep an eye and do your best. Already got one? Let us know what you think below.